Grubbing For The Truth 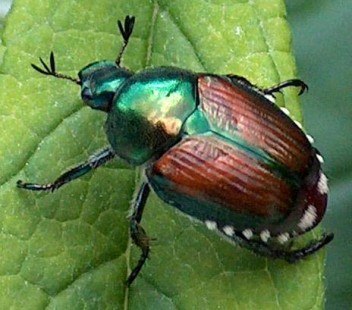 From late March to early April white grubs which have wintered underground begin to  move up to the soil surface to feed on roots.  In May they will form shallow cells in the soil to pupate.

By June they will all have completed their metamorphosis & emerge as adult Japanese or Masked Chafer Beetles.  They begin feeding  on the leaves & flowers of over 300 different plants & trees (including popular Knockout Roses)

Thru July  they will feed, mate & lay eggs.  After a day or two of feeding & mating, females will lay small clutches of 1-5 eggs in the soil.  They then begin the feeding/mating/egg laying cycle again.  This continues until 40-60 eggs per female are laid.

In August the eggs hatch & the young feed vigorously on roots, especially those of grass.  This continues until late October when fully grown grubs burrow down for the winter.  Most significant lawn damage from grubs will be noticeable at this time.

A side effect to grub presence is the invasion by moles, raccoon & skunks – all of whom find the grubs a mainstay in their diets.  Most urban yards will not have problems with raccoon or skunk but moles can be a highly noticeable problem.  Despite the good moles do – eating grubs, aerating the soil, moving subsoil nutrients up and organic materials deeper –  they can destroy the smooth appearance of a lawn.  Other than removing the food source & sending them elsewhere, the only solution is setting traps or hiring an experienced exterminator to do so.